For centuries, India was known as the world’s only source of diamonds. Then Brazil alluvial deposits were discovered in the 1700s. But both countries were over shadowed by South Africa’s enormous primary deposits, which appeared in the late 1800s. Today, because of advances in exploration technology, diamond deposits are no longer limited to one or two places.

New diamond sources came to light in the late 1900s. Canada yielded some especially promising discoveries. These development indicate that the world’s supply of diamonds will satisfy consumer hunger for more decade to come.

About 1730, Brazil replaced India as the world’s main source of diamonds. It kept that position until 1870, when production started in South Africa. Because Brazil is a country with wet, tropical climate, century of water erosion uncovered most of its diamond pipes and washed away their surface indications. As a result, Brazil’s diamond supply is exclusively alluvial. In fact, kimberlite pipes weren’t discovered there until 1968, and none have yet proven to be economically diamondiferous. Brazil is mined mostly by individuals or small groups.

Other part of South America, like Venezuela and Guyana, also yield all alluvial diamonds. Mining began in the early 1900s, but advances in mining technology made the 1900s the most productive years. Most of the yield from both locations has been industrial grade, with a few notable diamond, which they called El Liberdador. Other gem-quality diamonds from Venezuela include a rainbow of fancy colors: pinks, blues, greens, and even some black diamonds. 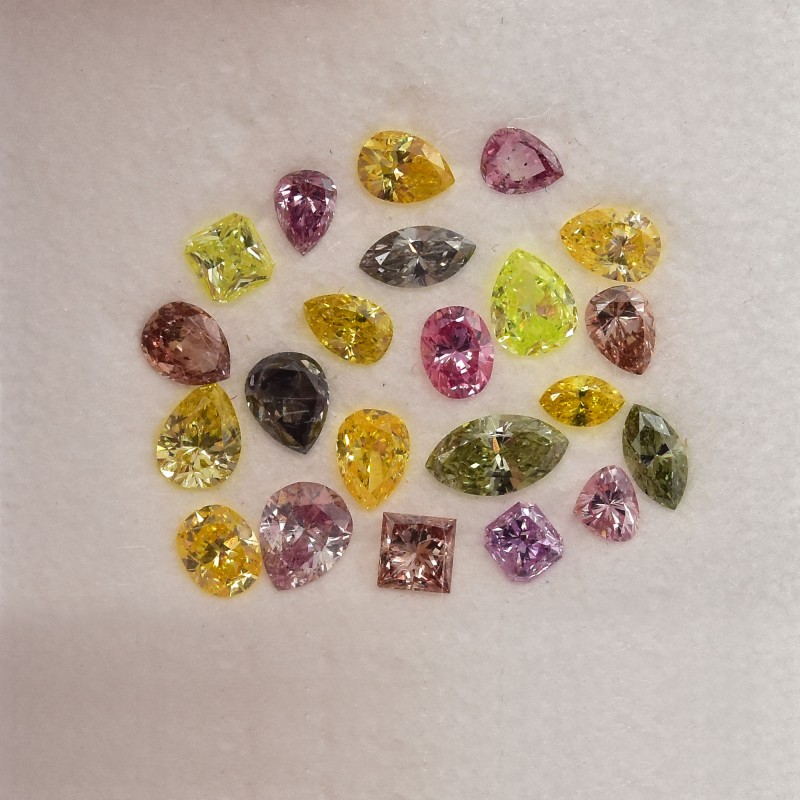 The african continent has a wide range of geographic features-mountains, plain deserts, rain forests, and seashore. Underlying it all are several archons, the oldest and most potentially diamondiferous of geologic structures. It’s no wonder Africa has the most diverse diamond sources. Its enormous pipes are legendary in the diamond industry. Its alluvial supplies are plentiful. And its marine deposits are abundant and hold great promise for the future.

Diamonds were discovered in South Africa in the late 1800s. At first, all South African diamonds came from alluvial sources. But once prospectors un earthed the first major diamond pipes, primary sources joined the secondary ones. White the country no longer leads the world in diamond production, it’s still a very important source. The first deposit, discovered between 1869 and 1871, were clustered around the town of Kimberly. The mines that resulted formed the basic of De Beers consolidated Mines Ltd., and marked the birth of the modern diamond industry.

Those early South African mines produced about 2 to 3 million carats a year-about 95 % of total world production-from 1872 to 1903. Amazingly, four of those mines  are still operating, although their supplies are dwindling. Today, their combined total is only about 0.7% of the world production.

Currently, the production in South Africa is almost 90% from kimberlite pipes. Three of the most important are Cullinan, called Premier when it was established in 1903; Finsch, established in the mid 1960s; and Venetia, established in 1991. The Cullinan mine has produced hundreds of diamonds weighing 100 carats or more: One quarter of all diamonds over 400 carats from this deposit. It’s also known for producing some rare and valuable blue diamonds.

The mine gained international fame in 1905 when the world’s rough diamond-the Cullinan was discovered. Named after the mine’s owner, this giant rough weighed 3106 cts. The Cullinan retains the title as the largest gem diamond ever found. A 599-ct rough crystal found there in 1986 was fashoined into the 273.85-ct Centenary Diamond, named to commemorate De Beers’ 100th anniversary. The big pear is the Cullinan!

Finsch mine was worked as the open pit site until 1990 when it was converted to an underground operation. It holds the distinction of being the most technologically advanced underground mine in the world. It features state-of-the-art automated and remote-controlled ore handling, transportation, and rock crushing system.

Venetia is South Africa’s newest and perhaps most significant mine. Discovered in the mid 1970s, it went into production in 1991. The Venetia produces between 4 to 5 million carats of diamond annually, about 40% gem quality. The total volume of diamonds and the high percentage of gem-quality stones rank the Venetia as one of the top mines in the world.

One of the world’s most important marine deposits lies along the Atlantic coast of Africa, in the country of Namibia. Mining of marine diamonds stared there in 1909, when it was still known as German Southwest Africa. There were no diamond bearing pipes near the shore, so geologists believe that the diamond came from the kimberlites in South Africa’s interior. As the Kimberlites eroded over the past 100 million years, the diamonds in them were washed into nearby waterways. From there they drained into ancient branches of the Orange River, which carried the diamonds west to the Atlantic ocean.

Tumbled and battered for centuries by stream, rivers, and ocean tides, the industrial grades and heavily included stones broke up and disappeared. As a result, a large percentage of the stones mined from the beaches are gem quality. The largest mining company in Namibia is Namdeb Diamond Corporation-a partnership between De Beers and the Namibian government. Other mining companies in Namibia include DBM.

As diamonds on shore begin to diminish, advances in ocean-mining technology are making it possible to dredge deeper, both near the coast and in the deep seeas offshore. This should keep Nmibia producing for many years to come.

The inland countries of central Africa-Botswana, Angola, and the Democratic Republic of the Congo, formerly Zaire-are also participants in Africa’s diamond trade. Of the three, onlyBotswana has a sizeable yield from primary sources.The country has two of the largest known kimberlite pipes, Orapa, and Jwenang. Botswana’s third mine is the Letlhakane. All three mines are open=pit operations. Debswana, a joint partnership between Botswana government and De Beers, operate them.

Orapa, began operating in 1971, is located in the northern region of Botswana. And currently the largest economically important kimberlite pipe in the world, yield over 6 million carats  per year.

Jwaneng, was started in 1982 in the Kalahari Desert in the southern of Botswana. Despite its name, which means ” a place of small stones,” the mine provides approximately 22 % of the world diamond production by value-about 1.5 billion. And, at an estimated 12.7 million carats covered in 1998, it ranks as the  third largest producer in terms of total carats per year.

The two smaller pipes located about 30 miles from the Orapa site make up the Letlhakane mine operation, which started production in the 1976, although production volume from this mine is about 1 million carats per year-considerably less than Orapa’s output-the ratio between gem and industrial stones is impressive :80% gem, 20% industrial.

Diamond in Republic of Congo and Angola are almost all alluvial, but mines there are plagued by illegal diggings and unstable politics.

The diamonds from West Africa are almost all Alluvial. In Guinea, diamonds are found in scattered deposits in the tropical rain forests that cover the country. In Sierra Leon, diamonds are found nearby everywhere, and about 70%of them are gem quality.  In certain portions of Ghana, the richness of the yield is almost unbelievable ; one 160-acre plot once yielded about 3 million carats. but the stones are very small, and about 90% are industrial grade.  In Tanzania, a country of Eastern Africa , Canadian geologist John Thorburn Wiiliamson spent years searching for the rich pipe deposits he was convinced were there. Finally, he discovered an enormous pipe at Mwadui, where serious production began in 1945. Most of the richer sectionwere mined out by the mid-1990s, but mine is producing again, and over half the total putpu is gem quality.

Diamondkarma.com is a participant in the Amazon Service LLC Associates Program, an affiliate advertising program designed to provide a means for sites to earn advertising fees by advertising and linking to Amazon.com and the Amazon logo are the trademarks of Amazon.com, Inc. Diamondkarma.com also maintain the affiliate relationships with other companies recommended on the website. All affiliate relationships have been established after researching and conducting the reviews.

On Valentine's Dat 2014 I had my second bad experience buying diamonds and decided to do something about it. I thought there should be a way to calculate exactly how much a diamond is worth at a jewelry store vs. online jewelry store vs. Craigslist.