In the world of classical music the Big 3 are Beethoven, Bach, and Mozart. In the world of art, they’re Da Vinci, Michelangelo, and Rembrandt. The Big 3 colored stones are Ruby, Sapphire, and Emerald. Like great music, these stones can inspire our heart and soul. Like great art, they can dazzle the mind and the eye. Each has a long, glorious history. For various reasons-romance, marketing, luck–the modern gem universe seems to revolve around the diamond, but people have desired Rubies, Sapphires and Emeralds just as passionately as they have lusted after diamonds. Lives, loves, and fortunes have been won and lost on each of them.

As you’ve discovered, the world of colored stones is broad and varied. Gems are mined from the earth, they’re produced by animals and plants, and they’re created in labs. They can be almost any color, from the deepest blues, reds, and greens to pastel tones and shades of gray. Some gems lack any color at all, such as colorless Sapphire and Topaz, and a few are completely black. In short, there are hundreds of gem materials beyond the Big 3. Even still, ruby, sapphire and emerald are the most important in today’s jewelry business. 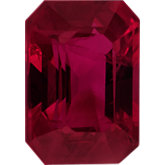 It’s very probable that humans discovered rubies about 3000 BC. The famous Mogok mining area of Burma (now known as Myanmar) has been heavily mined for many thousands of years that evidence is rare. However, there are documented references to ruby from far back in history. The Old Testament describes the ruby in the high priest’s breastplate. Ancient Sanskrit texts honor ruby with the word, ratnaraj, meaning the king of precious stones. Some gems come in ruby like colors, and they’re often given names that link them to ruby. These include rubellite for red tourmaline, rubbolite for red opal. rubicelle for red spinel, and rubace for red-stained quartz. In order to be called a ruby, red must be the dominant color. If the stone is reddish orange, it’s considered an orange sapphire. If it’s reddish purple, it’s a purple sapphire.

According to 13th century medical literature from India, rubies were believed to cure digestive disorders. Warriors in Burma inserted rubies under their skin so they would not be wounded in battle. People once believed rubies could ensure a peaceful life. Wearing a ruby, they thought, could bring health, wealth, wisdom, and love. People believed that if you wore a ruby in a ring on the left hand or in a brooch on the left side, it would give you a magical ability to live peacefully among your enemies.

Today, most of the rubies come from Myanmar and Madagascar. The name Burma is practically synonymous with fine quality ruby. Not all Burmese rubies are extraordinary, and not all rubies from other places are inferior. Other locations have also emerged as important ruby sources. One of those locations is the island nation of Madagascar. Ruby production began there in early 2000. The area had already been a blue sapphire source, and since then it has become an important supplier for ruby as well. Sri Lanka is also a significant producer, yielding steady supplies to the ruby market. The quality of rubies from Thailand, Cambodia, and Vietnam sometimes rivals Myanmar’s output. Afghanistan, Kenya, Malawi, Tajikistan, and Tanzania are a few of world’s other ruby sources.

One of the most important dates in ruby’s modern history is 1902. That’s when Auguste Verneuil announced the successful development of his flame-fusion process for synthesizing the stone. Today, synthetic rubies pose one of the most difficult challenges to gemologists. Ruby was the first gem to synthesized. Today, it’s possible to synthesize ruby using a number of processes. In addition to flame fusion, these include flux, hydrothermal, and Czochralski pulling.

Rubies, like emeralds, have telltale inclusions. These inclusions often provide the only way to tell whether a ruby is natural or synthetic. Many gem imitations are natural materials. This is especially true of ruby imitations, which include red spinel, known by the misnomer balas ruby. This gem often grows in, or near, ruby deposits. This occurs in Burma’s Mogok mining area, home to world’s premiere rubies. Its source location makes red spinel very deceptive, especially for wishful thinkers.

Thailand is well known for practicing to highlight the red color of rubies by heat-treating them and removing purple, or brown, overtones. The procedure becomes controversial, however, when they pack the rubies in borax powder. The borax melts into the stones’ fractures and cavities. It hardens, giving a false impression of the stone’s face-up appearance and weight.

In recent years, a new treatment that fills ruby fractures with high-lead content glass has become more common in the market. Some corundum also subjected to lattice diffusion treatment to create a red color. Color is the most significant factor affecting a ruby’s value. Ruby hues range from orange-red to purplish-red. The finest ruby has a pure, vibrant red slightly purplish hue. The highest quality rubies have vivid saturation. Orange, or more purplish, rubies are less valuable. Most people prefer medium to medium-dark tones as long as the stone isn’t to dark that it has a negative effect on brilliance. At the other extreme, if the stone is too light, it’s considered pink sapphire, even if the color is vivid. 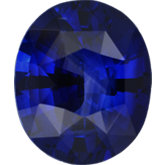 Sapphire and ruby both belong to the gem species corundum. Sapphires come in blue and also in a variety of other colors such as violet, green, yellow, orange, pink, and purple. They’re considered fancy color sapphires.

People took sapphire as an antidote for poison and poisonous bites. They believed the stone could clear the mind and skin, as well as cure fevers, plague, etc. – of at least those who could afford these precious gems. The superstition and faulty science began to recede in the late 18th century. That’s when crystallographers determined that sapphire and ruby were the same species and moved toward categorizing them under the name corundum.

For centuries, people used the term oriental to designate stones of a particular hardness that originated east of the Mediterranean. In later years, 18th century gem experts replaced that word with the new word “corundum” when describing sapphires. The word might not have been exact enough, but the idea was right. Corundum, no matter the color, was hard, and its primary source was in the East.

Of the, more than two dozen, places that produce sapphires the most famous historical sources are the Kashmir region, which straddles Pakistan and India, as well as Myanmar and Sri Lanka. Kashmir, high in the Himalayas, is renowned for the finest of all sapphires. They are an intense, medium-dark blue, with a unique velvety appearance. The color is called cornflower because it resembles the almost fluorescent blue petals of the cornflower flower. Burmese sapphires are also beautiful. Their blue is intense, but somewhat darker than the blue of those from Sri Lanka.

In Sri Lanka, another long-time source of sapphire, connoisseurs put a premium on Padparadscha, a sapphire with a pink-orange hue. The blue sapphires from Sri Lanka are called Ceylon. They are often lighter and brighter than stones from Myanmar.

Today, Madagascar is the most significant source of good to fine quality blue sapphires. Although Thailand, Australia and Cambodia offer a great source as well. Thai sapphires are usually dark blue in color, and giving some stones an inky appearance. Australian sapphires are also dark to very dark bluish green with strong pleochroism. Cambodia supplies many fine-quality blue sapphires. The most valuable blue sapphire colors are velvety, violet-blue to blue and have a strong to vivid saturation. Some other, but less significant, sources include mines in Africa and the US, which are known for producing fancy sapphires.

When purchasing a stone, a buyer wants to know the stone that they are about to purchase is genuine or synthetic, natural color or color treated.  The industry views heat-treatment as, not only common for sapphires, but also as practically an art form. This is because sapphire changes color when it’s cooked. It must be heated for the right amount of time and under the right conditions. Improved color is the main objective of the heat-treatment sapphires, while a secondary goal is to improve the clarity, which is actually a rather common practice in the sapphire trade.

Many synthetic sapphires are the result of the first and least expensive of the synthetic process; flame-fusion. Some of the earliest examples of this process are in the original pieces of art nouveau and art deco-jewelry. Flux grown sapphires became available in the early 60’s, but they are more costly than the flame fusion and their inclusions aren’t as easily identified as those in flame-fusion synthetics. It is also difficult to determine synthetic sapphires from either Czochralski-pulled or hydrothermal processes. 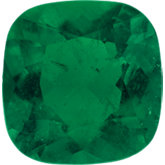 Emerald is a variety of the beryl mineral species, colored by chromium. The Bahia emeralds were colored by both chromium and vanadium, but mostly by vanadium. The first known emeralds emerged from the mines of ancient Egypt. Estimates of the earliest emerald mining range widely from about 3,500 to 330 BC. The quality of the stones themselves, by modern standards, were disappointing. These emeralds were small, discolored, and heavily included, but quickly became adornments for the powerful and priestly classes.

Emerald is famous for its distinctive green color. Some people believed its green color represented fertility and rebirth. Others believed they could see the future by holding an emerald under their tongue. It was thought that by wearing one, it would strengthen memory, improve eloquence, evade evil spells, and reveal the truth of a lover’s statements. The history of emeralds became deadly serious in the 16th century.

About 60 percent, out of the millions of dollars’ worth of emeralds sold each year, come from Colombia. Colombia’s emerald is well known for its distinctive rich, green color. The Puerto Arturo mine for emeralds is located near the town of Muzo. Being the king of all mines, it yields the best and biggest of the world’s emeralds. The violence, remote locations, and harsh climates make emeralds difficult to mine, and continue to be a way of life in Colombia. The major emerald sources are Colombia, Brazil, Zambia, and Zimbabwe. Less significant emerald sources are Pakistan, Afghanistan, and Madagascar.

Emeralds from different sources have distinctive features. The most prized emeralds hues are green to bluish green. Emeralds are pleochroic, meaning they absorb different wavelengths of light differently depending on the direction of incidence of the rays. The colors are so similar that you usually need special equipment to tell one color from the other. Besides hues, another important factor is the saturation, which is a color’s weakness or strength. The highest priced emeralds are those with intense, vivid color saturation. Tone, lightness to darkness, also contributes to emeralds value. The emerald’s value is lower if it’s too dark, even if it has a high saturation. If beryl is green, but too light in tone and too weak in saturation, it’s simply green beryl, not emerald.

It is common knowledge in gem trading that most emeralds are treated to improve their color and clarity. As with most treatments, there’s nothing wrong with this as long as you know that the stone is treated. Some are filled with oils, such as cedarwood, and others are filled with polymer resins to hide the surface-reaching breaks and improve transparency. 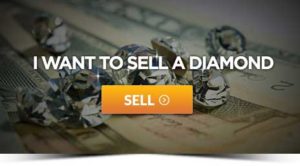 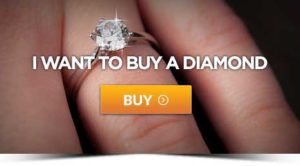 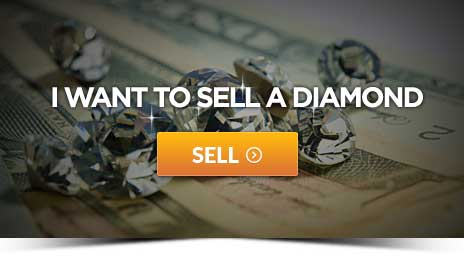 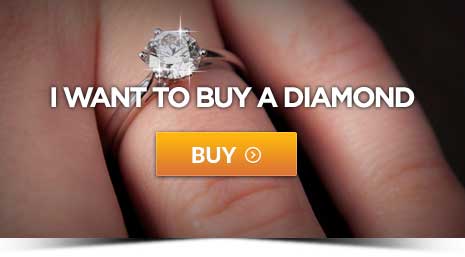